Home > News > Victorian punters lose another $2.5b on pokies 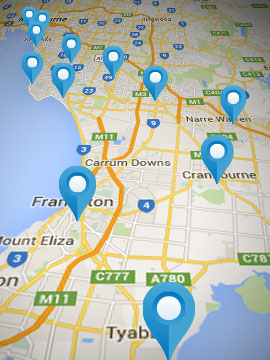 Use our geolocator to find your nearest Gambler’s Help Southern office.

Victorian punters lose another $2.5b on pokies 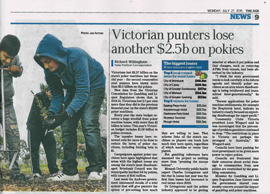 New data from the Victorian Commission for Gambling and Liquor Regulation shows that, in 2014-15, Victorians lost 2.7 per cent more than they did in the previous financial year on the state’s 26,000 poker machines.

Every year the state budget receives a huge windfall from poker machine losses, with more than $1 billion in taxes. This year’s Victorian budget includes $108 billion in pokies revenue. The massive losses have renewed calls for more to be done to reduce the harm of poker machines, including limiting bets to $1.

Campaigners against poker machines have again highlighted that areas with the highest losses are among the state’s most disadvantaged. Brimbank Council was the municipality hardest hit by pokies, with losses of $141 million.

Last week the Andrews government announced details of a trial system that will give punters the option of pre-setting how much they are willing to lose. That scheme links all the state’s machines so players can track how much they have spent, regardless of which machine or venue they played.

But gambling reformers have slammed the project as nothing more than “pressing the snooze button”. Monash University public health expert Charles Livingstone said the rise in losses last year was the first time losses had increased in real terms since 2009.

Dr Livingstone said the pokies industry appeared to be getting smarter at where it put pokies and that changes, such as removing ATMs from venues, had been absorbed by the industry.

“I think the state government needs to look carefully at its reform agenda and identify poker machines as an area where disadvantage is being reinforced and transmitted inter-generationally,” he said.

Community Clubs Victoria president Leon Wiegard said he was encouraged that the percentage of problem gamblers continued to drop. “The restrictions in place in Victoria are perhaps the strongest in Australia,” Mr Wiegard said.

Councils have been pushing for local government to be given more power to reject pokies.

Councils are frustrated that their concerns about social damage to communities from new pokies are overlooked by the gambling commission.

Minister for Gambling and Liquor Regulation Jane Garrett said the government shared community concern around the impact of gambling and poker machines.

Where Victorians lose the most: